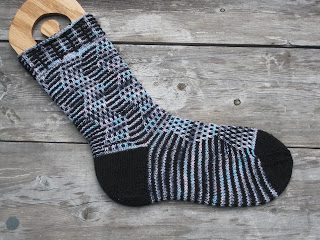 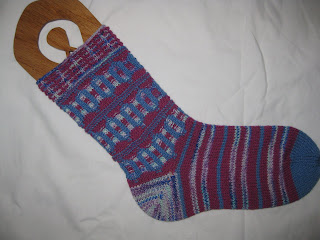 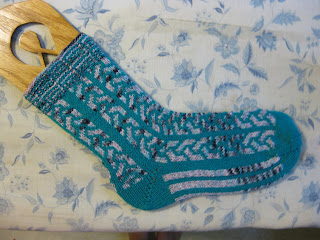 Now a days, a little luck on your side is a good thing. And, as we're having a bad day at work or with the kids, it's always good to remind ourselves there's a lot to be positive about.

My DH is a hard working guy who loves his family and our gardens. He's a painter and a musician, and has been very supportive of my blossoming knitting career. As a matter of fact, he gave me the gentle push into knitting that hasn led to this point. I'd been a crocheter, and admiring his mother's knitting. I'd dabbled in it some, but never felt that it fit. For Christmas 2002, he gave me a gift certificate to buy some good yarn (the $9.00 per skein kind) to do a sweater I'd been admiring in a Berroco pattern book. Plain stockinette stitch with garter edges, an oversized sweater done on size 13 needles. And when I got lost on the sleeve shaping, I called Berroco, and the designer herself called me back to walk me through it. And I haven't looked back since.

Fast forward a few years. SWTC put out a call for knitters that knew how to do toe-up socks on their Ravelry forum. I replied, and was sent yarn and the pattern. 4 more socks followed, all for the gallery in Socks A La Carte 2, and I've chronicled other items I've done for them in this blog. Last spring, Jonelle emailed me about some colorwork sock ideas, and the collaberation that became Socks A La Carte 3 was begun. And this book has finally made it to bookshelves, and I've included pix of some of the socks I knit for the book. The fair isle braid is my own design, and Persimmon I did in collaboration with Jonelle. Dad was able to see 3 of the socks for the book, Skullie, Steppin' Up, and Persimmon as I designed them. As much as I wish he had lived to see this finished, he did see my name in Socks 2, and he was so very proud.
I've also designed other patterns for them, and so far have been published in Knit 'N Style, with another design coming soon.

Why am I telling you this? I was lucky enough to be married to a man that indulged me and began me on the road to one of my passions. He also started me spinning, but thats for a later date.

I was lucky to be chosen by Jonelle, and to have kept her confidence in me. She's allowed me to spread my designer wings, much like a mother bird, watching and giving wonderful advice along the way.

And I'm lucky to have friends that know knitting isn't just for grandmothers anymore.